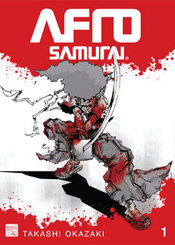 Afro Samurai In a futuristic yet feudal Japan, it is said that the one who wields the Number 1 headband is the fiercest fighter in the world and shall possess godlike powers. The only way to obtain the Number 1 headband is to challenge and defeat him in combat. However, only the Number 2 can challenge the Number 1, while anyone can challenge the Number 2, which causes a constant struggle for the Number 2 headband. Justice, the owner of the No. 2 headband, goes to fight the owner of the No. 1 headband, Afro's father. The two battle, ending with Justice decapitating Afro's father and claiming his headband. His head rolls in front of his son, Afro, as he sobs and vows revenge. Now an adult, "Afro Samurai" is the current No. 2 and a master swordsman. He travels Japan trying to make his way to the mountain-top keep where Justice awaits. As he makes his way to Justice, he recalls his journey from a frightened young boy to a master samurai. Along the way, many people challenge Afro for his headband, including the "Empty Seven Clan" who send various agents, including a robotic Afro, to kill him throughout his travels. He is also being hunted by his vengeful childhood friend Jinno, who was long thought to be dead. It is revealed that Afro's childhood samurai master became the new No. 2 after Justice killed Afro's father. When Afro confronts his master, they are both attacked by assassins, leading to the death of everyone except Afro, Jinno and their master. Jinno begs Afro not to kill their own master, claiming he is selfish and he is to blame for the death of their friends. Afro defeats the master and claims the number 2 headband. Jinno, filled with rage and hatred for Afro, throws himself off a nearby cliff. Afro as an adult finally confronts Justice. Afro learns that there are other headbands in existence, ranging to an unspecified higher number, and sees that the corpses of those who wore them are skewered throughout the room where Justice awaits. Afro defeats Justice and takes the No. 1 headband, and the other headbands disappear. Afro decides to live in the mountains once again. Jinno, adorned with every headband in existence, returns and confronts Afro for the No. 1 band and his revenge. Source: http://en.wikipedia.org/wiki/Afro_Samurai_Resurrection
Join . Forgot Password?
Top of Page