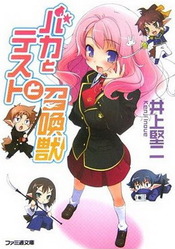 Baka and Test (バカとテストと召喚獣 Baka to Test to Shōkanjū?, lit. Idiots and Tests and Summoned Beasts) also known as Baka and Test: Summon the Beasts is a Japanese light novel series created by Kenji Inoue and illustrations by Yui Haga. The first novel in the series was released on January 29, 2007, and as of June 30, 2011, a total of thirteen volumes, including volume 3.5, volume 6.5, volume 7.5, and volume 9.5, have been published by Enterbrain under their Famitsu Bunko publishing imprint. A manga adaptation by Mosuke Mattaku started serialization in the manga magazine Shōnen Ace on April 25, 2009. Another manga adaptation by namo started serialization in the male oriented web comic magazine Famitsu Comic Clear on October 30, 2009. An anime adaptation by Media Factory was announced the same month. A promotional trailer was released for streaming in August 2009.[1] An anime series adaption began airing on January 7, 2010. Funimation has licensed the anime for release in the United States under the title Baka and Test - Summon the Beasts.[2] The second season began airing in July 2011. Plot Main article: List of Baka and Test characters The story centers around a boy named Akihisa Yoshii, also known as the idiot or "Baka" of the titled anime. He attends Fumizuki Academy, a school where the staff rigidly divides the students based on the results of their academic scores. At the start of the school, students are academically sorted by entrance exam test grades. The higher the grades, the higher the class, and the better the benefits. In this case, Class A is filled with the highest-scoring students; therefore, their classroom was filled with many prestigious items (air conditioners, fancy seats, laptops, a free snack bar, etc.), while the state of Class F is the complete opposite of that, representing the "bottom of the barrel" amenities. This academy has something special, where all the students manage to call forth Summoned Beings (Shōkanjū, or "Avatars" in the official English translation[2]). These Beings are used for battles between classes with the goal of capturing (or retaining) the best classroom facilities. Since Class A is filled with prodigies, they all have strong Summoned Beings, while Class F has drastically weak ones in comparison. A teacher must authorize/supervise each battle, and the health and strength of each summoned being is based on the student's last test score in that teacher's subject (i.e. Math, History, etc.). The beings lose points when struck by an opponent, and should the point count reach zero, the being and student are disqualified. However, if the student can leave the battle before reaching zero, these points can be replenished by taking a supplemental exam. The student's being may then return to the battle. On the day of the placement test, an intelligent girl named Mizuki Himeji suffers from a fever and is unable to complete her test, hence her reining in a score of zero. As a result, she is pigeonholed into Class F together with Akihisa Yoshii. Akihisa, who dreams of the day when the academy would no longer be divided by grades, pitches an idea to his class to rule over the higher-level classes by doing a Summoned Being War for both Mizuki's sake and to get more and more privileges. Aside from Mizuki (who happens to be the second-ranked student in the school), there is also the class representative Yūji Sakamoto, the bishōnen Hideyoshi Kinoshita, the perverted Kota Tsuchiya, and the tomboyish Minami Shimada (who, as Akihisa claims, is his worst enemy). Source: http://en.wikipedia.org/wiki/Baka_to_Test_to_Shokanju
Join . Forgot Password?
Top of Page