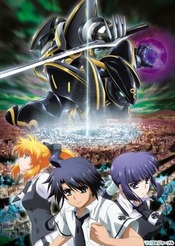 Following the precedent Asura cryin' Tomoharu has now the dilema of making a contract with an 'Akuma' since he might lost his dear friend Takatsuki if not, but doing so will compromise his own existence as the one from his ghost friend Misao since this will make them an "Asura cryin' ". The biggest threat to humankind according to the school presidents. And the decision will be even harder since they now recover some of their past memories, memories of a 1st world they didn't know that existed.
Join . Forgot Password?
Top of Page